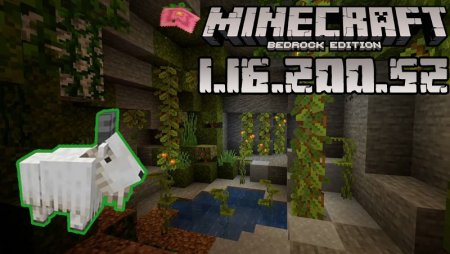 Game Minecraft PE
The Majong team releases new game versions weekly, but lately, the updates used to contain a very limited number of fixes, for example in Minecraft PE 1.16.200.51. This week is so special because the released beta, that is Minecraft Bedrock 1.16.200.52, is much richer and does not contain only bugfixes, but also three very important new features: a very interesting experimental option, a new mob, and a new block.

Because this beta contains a very big number of fixes, we will mention only the most important ones, giving priority to the new features, but we will talk about them later. First, let us see what problems had to be fixed:

All the above-listed problems were successfully fixed and now it is time to finally learn about the new features mentioned at the beginning of this article:

If you want to meet the new mobs and to see what it’s like to interact with powder snow, click on the button below the video to download this beta, share the news with all your MCPE buddies, and leave feedback.
Visit our website regularly and you will always be the first to find out about the latest game updates and about the most popular maps, mods and other free MCPE-related surprises. Have a great time!